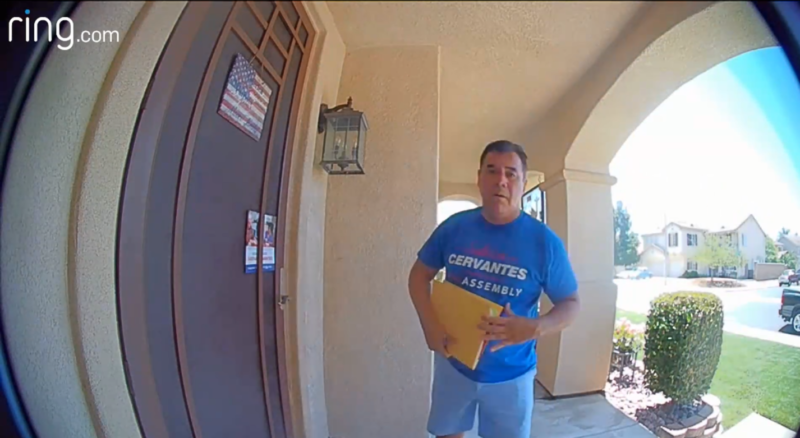 RIVERSIDE COUNTY, CA — In an abhorrent display of dirty campaign tactics, Democrat Assembly Member Sabrina Cervantes’s campaign worker was caught on the video of a private residence in Eastvale. Earlier today, Shauna Moore was left in shock as she viewed a video on her front door security camer of a Bill Essayli campaign handout blatantly removed from her door, replaced with a Sabrina Cervantes mailer, and then watched as the worker walked away with the handout — stealing it from her front door.

Shauna posted the video earlier today on her personal Facebook account: “A good reason ‘NOT’ to vote for Sabrina Cervantes! Just watched this guy take down the Bill Essayli flyer that Bill ‘himself’ left on our front door earlier today and replace it with Cervantes flyer! Crooked!”

“While I don’t put anything past Democrats and dirty campaign tactics, I still have to admit I am shocked that Assembly Member Cervantes’ campaign would stoop to such low behavior in effort to win an election,” stated Jonathan Ingram, Riverside County Republican Party Chairman. “We immediately demand that this person be fired, publicly named, and a written apology come from Assembly Member Cervantes. She should be embarrassed and horrified about this. If one person from her campaign team did this, who is to say her whole campaign doesn’t operate this way? It’s despicable.”

Bill Essayli is a former US Attorney, and currently works with the Riverside County District Attorney’s office. He is the lone Republican rival vying to replace fledgling Assembly Member Sabrina Cervantes — still in her first term of office, when rookie legislators are at their most vulnerable.

California’s 60th Assembly District is one of the top targeted seats by both Democrats and Republicans. The swing district which plays an important determining role whether the Democratic Party retains its two-thirds majority in the California State Legislature, or if Republicans can pick up enough seats to potentially block future legislation from the dominant liberal majority in Sacramento.