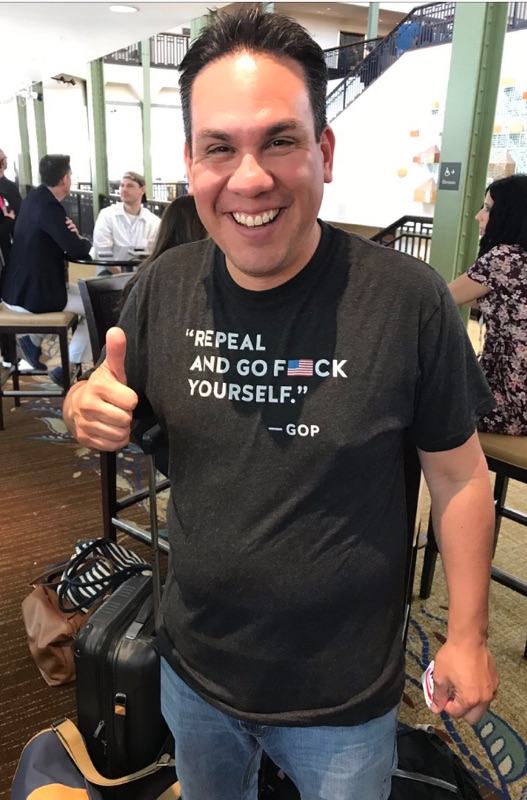 A few days ago, a photo was snapped of you wearing a shirt with the phrase “REPEAL AND GO F*CK YOURSELF.” —GOP on the front.

But that’s not the main point of this letter. The point is what your proudly displaying that t-shirt means.

It means you have chosen to only represent a portion of the communities in California’s 31st District: only those who agree with you.

It means you have brazenly dismissed the concerns of Republicans, Independents, and even some Democrats who are concerned with whether the ACA is actually improving their lives.

It means you are closeminded to any solutions other than what has been pre-approved by Nancy Pelosi and Democrat Caucus staffers in Washington DC.

And that’s a shame.

A few days ago, Ben Sasse (R-NE) spoke on the US Senate floor about Congress’s descent into tribalism. Your shirt is emblematic of that descent. While you are protected by the First Amendment to wear that shirt, it doesn’t mean you should. Elected representatives need to be held to higher standards. And that’s coming from an elected representative.

You represent everyone in your district. Not just the ones who agree with you; not just the ones you like. What we need in the Inland Empire now, more than ever, is elected leaders who listen to and respect all points of view — who don’t demonize and misrepresent voters who don’t conveniently adhere to Democrat Party dogma.

You have a tough opponent this year in Sean Flynn. He has a PhD in economics, is a successful entrepreneur and teacher, and already promised bipartisanship and to represent everyone in the district. And let’s not forget you won your primary election by only 0.8%. If you haven’t already alienated too many in the 31st District, I implore you to think about your actions and do better.